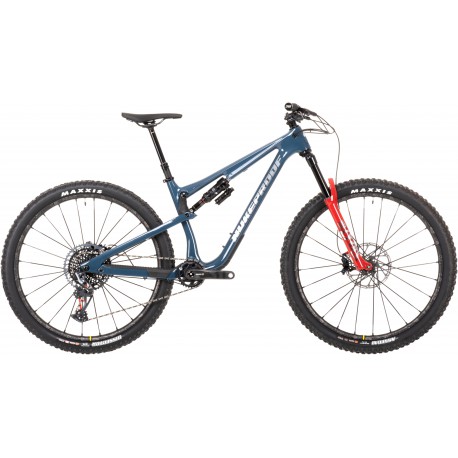 Giving you 10mm more front suspension travel than the rest of the Reactor 290 range, the 290 RS model ensures you’ll float over the rough stuff and carry your speed better after jumps and drops. The 290 RS’s carbon frame combines with the RockShox Lyrik Ultimate forks, SRAM Code brakes and SRAM X01 drivetrain to guide you through the toughest trails with ease.

From concept through to design, the Kinematics, the geometry and specification; the Reactor is designed from the ground up to be the ultimate aggressive trail bike. It is at home on technical climbs, but happiest when thrashing the most technical trails you can point it at. The Alloy Reactor features a custom triple butted hydro-formed tube set and carbon seat stays, which help reduce the overall weight of the frameset. Critically this reduces the unsprung weight; making the suspension as active as possible. The Reactor is available for 27.5” or 29” wheel sizes. These are two totally different, compromise-free frames that were designed and developed at the same time. Each frame is simply tailored around each wheel size.

All Reactor frames feature a “flip chip” to adjust the geometry from “Trail” to “Rail mode”.

Trail – As the name suggests, this setting is best suited for trail riding. It is for riders who get as much enjoyment from the climb as the descents.

Rail - The Rail setting turns the Reactor into a corner shredder, dropping the bottom bracket 6mm and slackening the head angle by half a degree. It is there to maximise descending capabilities.

To ensure the bike could climb as well as it descends, Nukeproof designed the 4 bar horst linkage to have higher levels of anti-squat for climbing gears but lower levels when you drop down the cassette. This means that the bike can behave itself on the climbs but when you get it up to speed, it turns into a trail hooligan. The combination of low anti-squat and progressive rate give ultimate small bump compliance (removes rough trail and root chatter) with good mid stroke support for cornering/pumping and end stroke progression for aggressive riding. Balanced anti-rise figures allow the Reactor some squat when braking hard, maintaining rider position and providing a good amount of pressure through the tyre to ensure traction. The Reactor is designed to reward the rider and ensure you get that stoke factor on any ride.